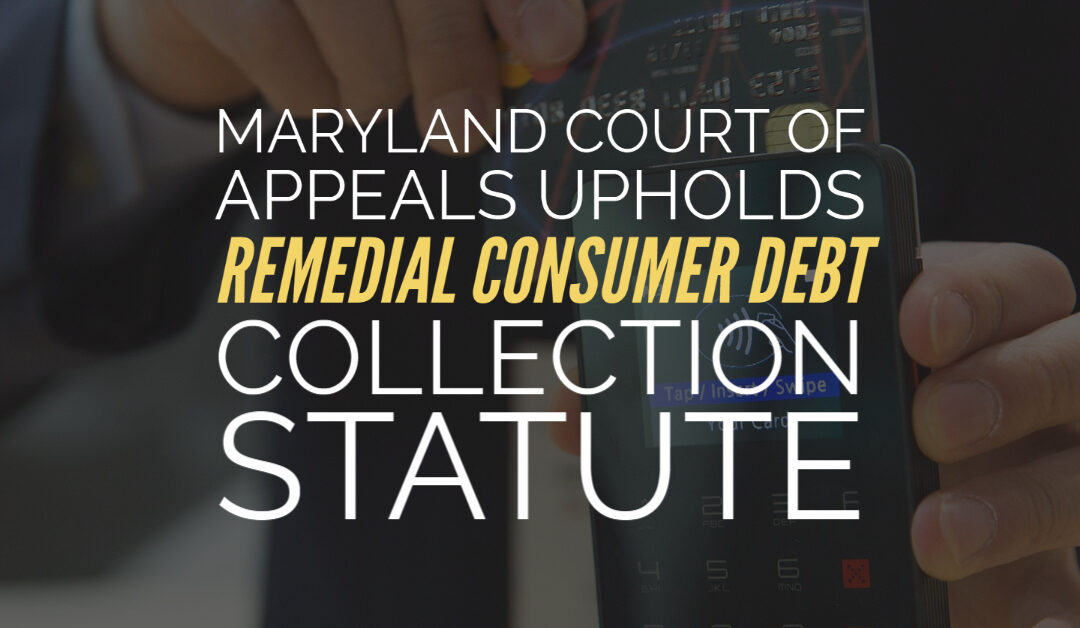 Unlike its sister statute under Federal law, i.e., the Fair Debt Collection Practices Act (“FDCPA”), the MCDCA applies to all creditors in consumer transactions whereas the FDCPA applies only to specially defined debt collectors.  In a line of cases beginning with the United States District Court for the District of Maryland, the Federal court narrowed the scope of the MCDCA to not include unlawful collection activities related to disputed sums claimed owed by the collector.  However, nowhere in the actual text of the MCDCA does such a limit exist.  On its face the MCDCA is broad.   And in light of Chavis II and Kemp II the prior lower court and related Federal court decisions are effectively reversed and no longer stand as good law.

Looking to the Federal Court, Maryland’s intermediate appellate court previously held that the scope of the MCDCA was limited to unlawful “methods” of collection and not disputes about sums claimed due by a collector from a consumer.

“The MCDCA, and in particular § 14–202, is meant to proscribe certain methods of debt collection and is not a mechanism for attacking the validity of the debt itself.” Fontell v. Hassett, 870 F. Supp. 2d 395, 405 (D. Md. 2012). “A collector who violates any provision of this subtitle is liable for any damages proximately caused by the violation, including damages for emotional distress or mental anguish suffered with or without accompanying physical injury.” CL § 14-203.

The Court’s rationale and holding of the scope of the MCDCA was, however, rejected and reversed in Chavis II.

We disagree with the Court of Special Appeals’ and the federal court’s distinction between “methods” of debt collection and “amounts” of debts sought to be collected, when assessing a claim under CL § 14-202(8). Neither § 14-202(8) nor the prefatory language in § 14-202 contains the word “method.” Rather, the statute prohibits a debt collector from engaging in certain conduct when “collecting or attempting to collect an alleged debt.” The broad reach of the statute is indicated by the use of the phrase “alleged debt” – the conduct proscribed by the statute could concern both valid debts and invalid ones.

The “Knowledge” Element under the MCDCA (and similar remedial statutes)

In reviewing the “knowledge” element required by Com. Law § 14-202(8) of the MCDCA, the Court of Appeals concluded that “depending on the particular circumstances of a case, a debt collector’s claim of a nonexistent right in an unsettled area of the law may or may not be reckless.”  Chavis II..  Further, a debt collector does not escape liability under § 14-202(8) whenever, in the absence of controlling authority, the collector makes a mistake of law.

Respondents’ argument fails to recognize that whether a defendant acted recklessly is a question of fact. Thus, in every case where the law was unsettled when the debt collector claimed a right that later turned out not to exist, the debt collector’s liability under CL § 14-202(8) will depend on all the facts the parties enter in evidence. We expect that, in some cases, at the end of discovery there will be no genuine dispute of fact concerning the defendant’s recklessness (or lack thereof) in claiming a right, and one party or the other will be entitled to summary judgment. In other cases, the jury will have to decide whether the plaintiff has proved the defendant had the requisite mental state.

to the extent the MSBA contends that an attorney can never be liable for claiming, attempting, or threatening to enforce a right where the law is unsettled as to the existence of that right, we disagree. The General Assembly undoubtedly knows that some “collectors,” as defined in the MCDCA, are attorneys. Yet it has not exempted attorney collectors from the requirements and prohibitions of the MCDCA. See Andrews & Lawrence Prof’l Servs., 467 Md. at 154, 223 A.3d 947. If, in the course of collecting or attempting to collect a debt, an attorney recklessly claims a right that turns out not to exist, the attorney – like any other debt collector – is liable under the MCDCA.

In light of the Court of Appeals’ express rejection of the MSBA’s desired exemption of attorneys acting as collectors from the scope of the MCDCA and its express reversal of Chavis I, the novel legal error defense embraced by this Court in Chavis I also no longer stands as good law.  The Court of Appeals summarized the policy reasons for its holding as follows:

We have every reason to believe that Maryland’s debt collection bar is up to the task. In any event, CL § 14-202(8) does not require a showing of actual knowledge by attorneys and recklessness as to non-attorneys. The recklessness standard applies to all debt collectors. If the General Assembly decides that attorneys should be treated differently than non-attorneys in this context, it may amend the MCDCA accordingly.

Recognizing the distinction between non-reckless and reckless mistakes of law that the General Assembly has incorporated in § 14-202(8), and understanding that whether a debt collector acted recklessly presents a question of fact, Chavis II.

Kemp II, a case involving the Consumer Law Center LLC’s client and argued in March 2021, also holds that mortgage actors are subject to the scope of the MCDCA for attempting to collect mortgages.  “The MCDCA regulates the conduct of anyone who collects – or attempts to collect – a debt arising from a consumer transaction.”  Kemp II (also recognizing collection on a personal mortgage loan is subject to the MCDCA).

In reviewing the “knowledge” element required by Com. Law § 14-202(8) of the MCDCA and after adopting the holding in Chavis II, the Court of Appeals looked to certain evidence to confirm the plaintiff had shown the mortgage actors’ reckless disregard.   Specifically, the court held

the knowledge element is met when the law is settled, because the debt collector’s recklessness in failing to discover that law is the equivalent of knowledge. Id. at ––––, slip op. at 30-31. However, we do not agree that the existence of a “potentially meritorious” argument as to the existence of the right necessarily negates knowledge. As also explained in Chavis, the question whether a debt collector acted recklessly is a question of fact, to be determined in light of the particular circumstances. Id. at ––––, slip op. at 31, 33.

Kemp II reaffirmed Maryland law that an assignee of a mortgage loan simply stands in the shoes of its assignor and predecessors in interest.  Kemp II found further that indicia of “knowing” or “reckless disregard” may be established by examining the mortgage loan documents themselves.

The Consumer Law Center is pleased that these decisions will reestablish the MCDCA as a remedial statute to protect consumers from unlawful collection activities.